I woke up to rain and +5  while camping near Jasper. By the time my coffee was pressed and an egg/bagel sandwich cooked over a wet and smoky pine branch fire, the rain was replaced by a comforting sun that claimed it could be a bluebird day. I swapped wet flip-flops for dry socks and spd’s and set out on a lazy lap by the river to warm up lungs and legs before starting what I knew would be a day of proper elevation gain.

A few kms into a rolling singletrack trail that was described to me in hushed voices over the bar last night I begin a serious ascent. I forget about the smell of the pine trees for a few minutes as I drift between two of my favorite climbing techniques. My first method for hammering down is to count revolutions as I pedal. Not in a scientific way, I don’t

actually care how many pedal strokes I’m taking, a lot of the time I don’t even start at 1 and I often lose track before 100. So I just start over from, oh lets say, 87. That’s how I pedal up sustained climbs, counting from 5 or 6 up to 87 or 90 over and over and over again. Some hills take about 100 90’s to get to the top. Those are often rewarded with the second round of egg/bagel/coffee, which is also on its way up. The second technique I have accidentally mastered is to repeat a really annoying phrase in my head and sync it up with each revolution of the pedals. 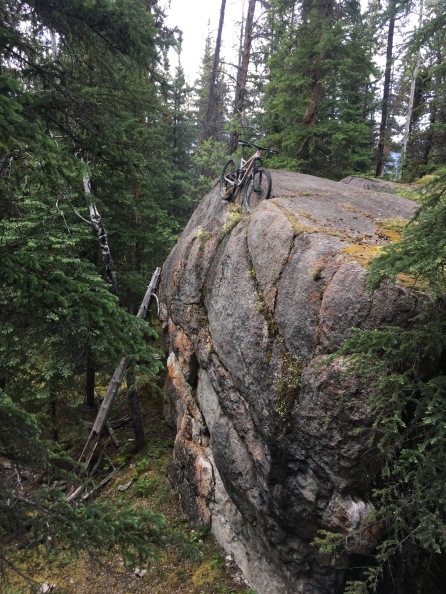 Tracey Jordan from 30 Rock has motivated me up more climbs than he will ever know. My counting and the absurd mantras are routinely interrupted by tricky sections of wet roots, granite, and trees fallen across the trail as I fade in and out of awareness. It’s not exactly an ethereal experience, and the ringing bear bell on my handlebars is intrusive enough to keep me grounded, but it allows my mind to wander away from the burning in my thighs, lungs, and, yup, saddle sores.

You can learn a lot about personal limits on a bike. If I quit when I got tired I wouldn’t bother carrying a multi tool in my pack because I would probably just give up about 500 feet from the toolbox in my truck. But lets not confuse fitness with stubbornness. The human body can go way beyond the limits the mind sets for it, and this has become very real to me from the saddle of a mountain bike. I always apply Newtons first law while I’m pedaling away from the trail head and deeper into the forest. – An object in motion wants to stay in motion. Its easier to keep pedaling into the next valley than it is to stop at the top of every climb. Just keep pedaling, keep counting, keep chanting, suppress the urge to vomit at km 26, and I’ll be unstoppable.

I’m still new to orienteering, but as far as I can work out I’ve climbed real high, and real deep into a trail with no signs because Parks Canada doesn’t know about this one. Through the hottest part of the day the peak of Pyramid mountain offered shade from the surprisingly warm afternoon, but that shade is no longer needed. A large, grey, snow cloud has enveloped the entire face of the summit and is gaining momentum towards me. I’m already above the tree line and I’m not going back down without a fight, so the south side of an overhanging rock will have to suffice as shelter, along with the jacket that I never leave the house without. Always listen to your mother.

The snowstorm lasts just long enough to boil water for soup and coffee under the relative calm of my rock shelter. A cold, north wind blows away the remaining clouds and the sun peeks out for another round of bluebird. The snow quickly melts and I’m back on the bike but the now wet rocks throw a wrench into my mantra technique.

‘are you a large child or a small adult? are you a large…’ My chant is broken as I spin out on a slick off-camber rock and barely un-clip in time for a less than graceful dismount. If the top of the trail was my destination I would probably find myself frustrated, but I have no finish line and no strava times to beat. Jasper’s trail network is not about pounding out laps, it’s about exploring on two wheels. Stumbling and grunting my way up this wet and rocky alpine summit is exactly where I want to be.

It takes almost as long to ascend the last 500ft of the mountain as it did the first 2100, a complicated and clumsy mixture of pedaling and shouldering the bike to get through some sections. But the view alone is worth every drop of sweat running down the lenses of my sunglasses. I savour the moment on the exposed ridge as best I can while refueling with some chocolate bars. With the sun fading from gold to amber, I’m tempted to drop into the trees to spend the night, but a quick reminder that if it was only +5 in the valley this morning, Its going to be more than slightly less comfortable at higher elevations. I decide to race the sunlight down the mountain. A quick inspection of my bike, a flip of the suspension platform lever, and I’m ready to drop in. 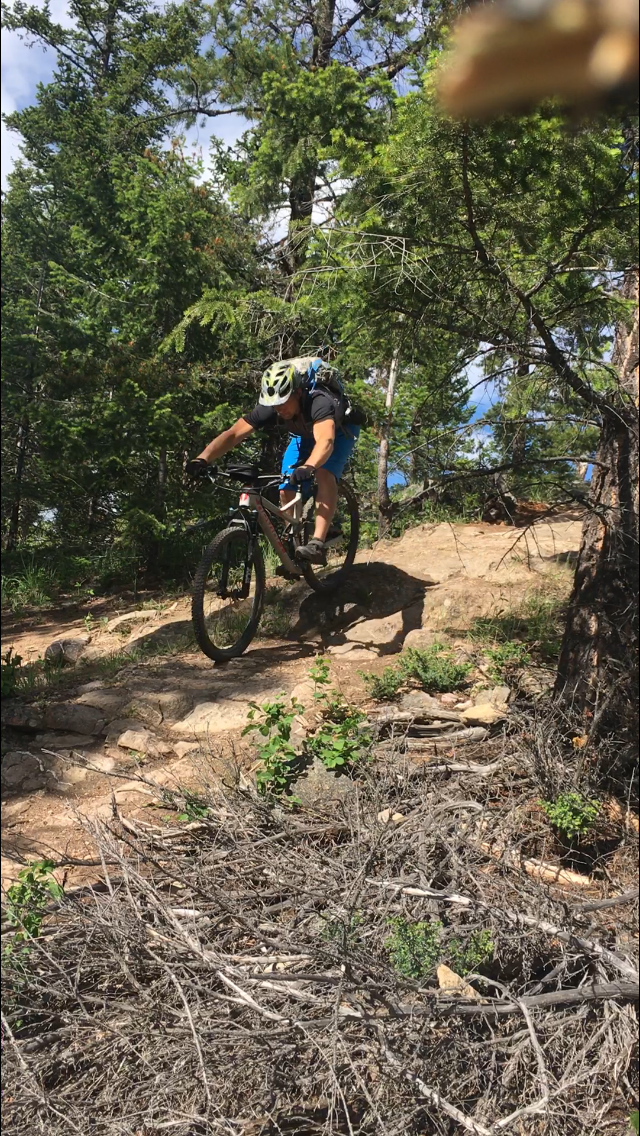 As blissful as going down is, I can’t help but interrupt my own fun by reminding myself that every minute of high-speed descending required 10 min of punishing climbing, so I’d better enjoy every heart pounding second of it. But the climb is almost always worth it, I have yet to regret a day that I’ve swung a leg over a bike. Not all rides go perfectly, some can almost border on frustrating, but a day on the bike is always better than not. 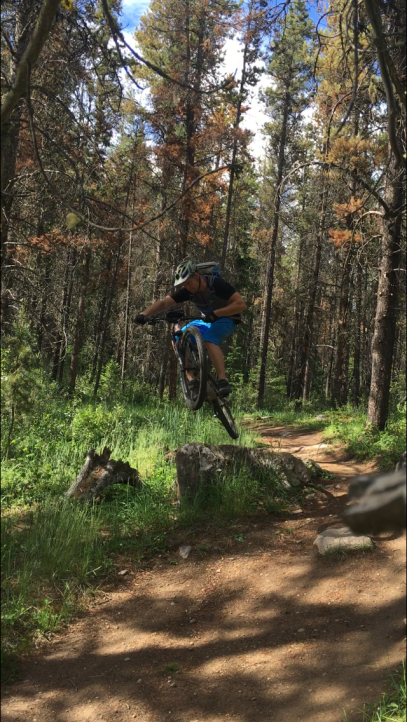 Today is no exception. The technical rock alpine descends into seemingly endless high speed singletrack perforated by sections of rocks and roots, I transition nearly seamlessly between becoming airborne off rocks and railing corners, lost in the flow of the pine needle covered ribbon below me until it morphs into a double-track abandoned fire road for the final 6km. With the technical sections behind me I have room to really open things up and settle into some properly high speed descending. Time, weather, bears, and reality fade into the wind that’s now screaming past my ears. There is only speed. 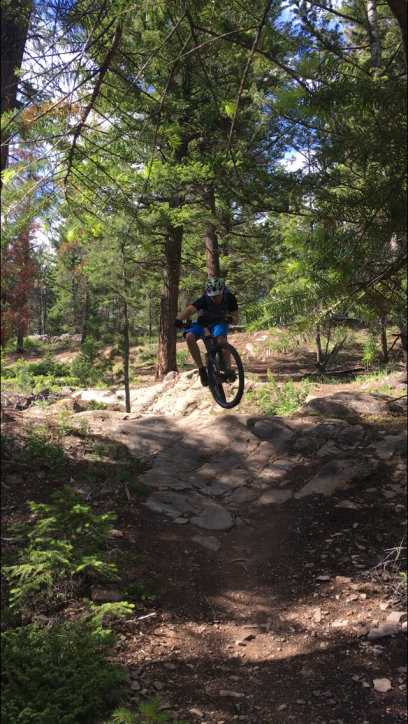 It’s over way too fast. I recognize the last corner before the parking lot and milk a skid with all the flamboyancy of a san-fran pride parade. All the endorphins pent-up from a 6 hour ride released into a 60ft long one-footed power slide into the side of my truck. A couple of other riders who spent the day on a different trail are in the process of loading up their bikes and chuckle at my enthusiastic arrival. Nearly no small talk is required before trail sodas are passed around and stories of the days heroics are exchanged with my newfound friends.

The temperature drops nearly 15 degrees as soon as the sun dips below the mountain range, but shortly after sunset I’m back at my campsite in my flip-flops, the fire casting its much-needed warmth and light as I settle into a lawn chair and a book. I’ve started summing up my days by figuring out how much adventure I can find between morning flip flops and evening flip flops. Today was memorable, but yesterday was equally amazing, and tomorrow promises the same. 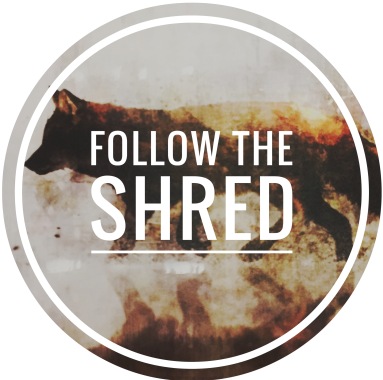 6 thoughts on “Life between flip flops”